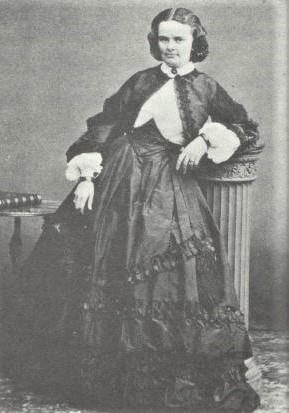 Harriet Hosmer is one of the most well-known sculptors of the nineteenth century, esp. for The Sleeping Faun and Zenobia in Chains.

Besides her art, she is most well known for masculine attire and activities. Both her father, "Dr." Hiram Hosmer, and Harriet do not conform to gender norms. Hosmer moves to St. Louis (Missouri Medical College) in 1850 and is friends with Wayman Crow who supports her social standing. In October 1851, Harriet visits Charlotte Cushman in Boston, after Cushman's first farewell tour in the US. She is close to Charlotte around 1852. In that year, she is part of the group including Charlotte who moves to Rome. Hosmer stays in Rome until the summer of 1857. Harriet Hosmer and Charlotte Cushman live together again in Via Gregoriana in Rome from 1860 to 1865. In 1865, Hosmer moves to 26 Via delle Quattro Fontane. In April 1862, her father dies which eventually brings her closer to Wayman Crow on a professional base, although they have been close friends for a longer time.

She is supported by William Wetmore Story, the Brownings, and Charlotte Cushman. Elizabeth Barret Browing is particularly taken with her. In a letter to English author Mary Russel Mitford, she described Hosmer as "a great pet of mine and Robert's [...] who emancipates the eccentric life of a perfectly 'emancipated female' from all shadow of blame by the purity of her's. She lives here all alone (at twenty two) as Gibson's pupil, (while her father lives in America), – dines and breakfasts at the caffés precisely as a young would, – works from six oclock in the morning till night, as a great artist must" (May 10, 1854; qut. in Meredith B. Raymond and Mary Rose Sullivan (ed. and introd.), The Letters of Elizabeth Barrett Browning to Mary Russell Mitford, 1836-1854, vol III: 409)

In the 1860s, she is exposed to slander about her Zenobia statue. Rumors are spread, especially by The Art Journal and The Queen, that she has not been the statue's creator. Hosmer defends herself publically in the Atlantic Monthly (Dec 1864) with her article "‘The Process of Sculpture," in which she aims to "correct the false but very general impression, that the artist beginning with the crude block, and guided by his imagination only, hews out his statue with his own hands."

Hosmer is romantically linked to a number of women, among them Lady Ashburton and, most importantly, Emma Crow's sister Cornelia Carr. Carr publishes Harriet Hosmer: Letters and Memories (1912). Despite Hosmer's long presence in their shared household, Stebbins refers only once to Hosmer in Charlotte Cushman: Her Letters and Memories of Her Life (1878).

To nineteenth-century readers, Hosmer also appears to be the real-life model for Hilda in Hawthorne's The Marble Faun.

After their initial closeness, the relationship between Charlotte Cushmand and Harriet Hosmer gets more formal and ends in a quarrel over Ned Cushman and Prince Bandini 1869 (Sherwood 298). Culkin elaborates on that as follows:

'In 1869 the friendship between the artist and Charlotte Cushman suffered irreparable damage. The faults in the foundation had been there for years, probably since Emma Stebbins first moved into the Cushman household, and the distance between the two women had grown after Harriet established her own home. It must certainly have been hard for Harriet, who loved to be - and expected to be - the center of attention, to see the actress shower another with her affection and influence. The final break, however, did not explicitly come from a fight over patronage. As so often happens in personal relationships, the underlying tensions were exposed by a seemingly trivial, even ridiculous, matter. Harriet and Ned Cushman joined together to protest the fact that in the foxhunts that were held regularly outside of Rome, Americans never won the highest honors, and the two withdrew from the events. But when Prince Bandini asked Harriet to return in 1869, she accepted, even though the invitation was not extended to Ned as well. Charlotte Cushman, who was suffering from breast cancer at the time, was livid. The fight escalated when Harriet, insulted by the actress when visiting her, refused to invite Cushman to a dinner she gave for the Longfellow family. When the Cushman household left Rome in the summer of 1869, none said goodbye to Harriet. Eventually a partial reconciliation came about, but the friendship never fully recovered. Still, even at her moment of greatest anger Harriet acknowledged that she was 'always ready and willing to testify to my great indebtedness' to Cushman." (Culkin 116)


In Hosmer's biography, Culkin comments on Hosmer's relationships with other women: "Throughout her life, Harriet had had flirtations with females, but the woman she seemed closest to had always had another partner. Charlotte Cushman was involved with Matilda Hays and then Emma Stebbins; Cornelia, despite the intensity of her friendship with Harriet, married Lucien Carr. Harriet's relationship with Marion Alford hay have started as a flirtation, but quickly evolved into a friendship. With Asburton, Harriet had the longest-lasting romance of her life, with a woman she could claim as hers. The relationship had enormous consequences for the artist - emotionally, professionally, financially, and geographically." (Culkin 117)

In her monograph on Charlotte Cushman, Merrill states that "Charlotte and Matilda together embodied a degree of female independence and an alternative style of living that Hatty had never seen before" (169).


Controversy about the Hosmer and Cushman relationship among scholars:

Sherwood claims that Hosmer was greatly indebted to Charlotte Cushman (300). Culkin describes Harriet's father, Greenwood, and Cushman as Harriett's most important advocates in Italy: "Greenwood represented the writers who promoted the young artist in the American press, another critical part of Harriet's quick rise to fame. Greenwood had achieved popular success with a regular column published in the Saturday Evening Post and the National Era had hired her to document her trip abroad through "a series of Letters form the Old World"; thus Harriet's debut in Italy was chronicled in a national publication. From the second she entered Rome, then, the people of the United States were following the sculptor's progress. … Harriet's network made her first days in Rome much easier. Cushman established a house for her party at 28 Via del Corso, giving the sculptor a base near the Spanish Steps, the heart of the expatriate community." (Culkin 29)
Culkin repeatedly writes about Cushman's decisive and planned contribution to Hosmer's career: “Charlotte Cushman was especially adept at using an active social life in Rome to spread the word about the young artist. The actress hosted weekly salons at her house, introducing Harriet to the most notable names in Rome, and Cushman and her housemates were also invited to other social events. Cushman did not simply introduce Harriet to expatriate society at these occasions; she also actively solicited support for her friend.” (Culkin 31).

The Stebbins and Hosmer relationship is presented as ambivalent. Additionally, the secondary texts seem contradictory about how to categorize their relationship, as is exemplified by two excerpts from Culkin and Merrill.

"Her father's death changed Harriet's life in a practical way as well. She was his sole heir, and thus she now had another source of income. Dr. Hosmer had for a time arranged for a male cousin, probably Alfred Hosmer, to oversee the estate. When she found out and protested, her father rewrote his will so the inheritance came directly to her. Harriet needed money, and Cushman, noting the timing, commented, 'I never saw a person who was so universally fortunate in m life & sometimes I think it is a reward for her being so universally cheerful.' [LoC CCP, CC to ECC, May 7, 1862] The death also linked Harriet more closely to Wayman Crow, who would now play an even larger role in managing her finances." (Culkin 67)