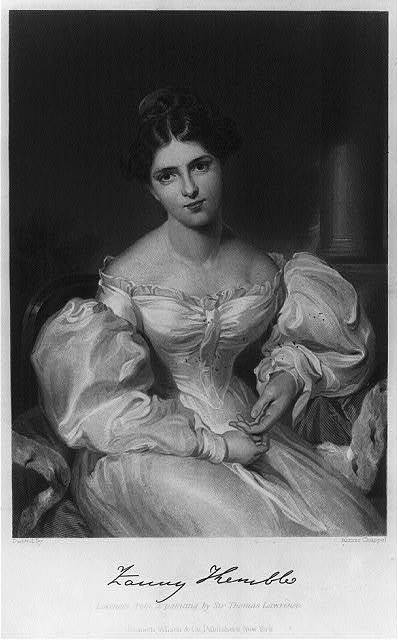 She is married to Mr. Butler but gets divorced. Charlotte Cushman supports her in her fight for custody. Kemble is an old friend and theatrical colleague of Charlotte Cushman. Eventually, they part on bad terms, as Fanny is disturbed by Charlotte's growing affection and attention which Fanny does not reciprocate.
George Combe is her nephew who raises concerns regarding Cushman's gender-bending performances on stage.
Kemble is the niece of famous actress Sarah Siddons.

Commenting on Kemble's relationship to Cushman, Merrill states that "Cushman was more than willing to help rescue Fanny. Charlotte enjoyed being the savior, and here was a chance to right a great wrong against a woman she adored and render herself indispensable. She offered to help Fanny amass proof of Pierce Butler's infidelities so that Fanny could divorce him and retain custody of her children. But none of Charlotte's overzealous attempts to help were successful. And any slight waning of Fanny's interest was painful to Charlotte. More like a lover than a colleague, and interested friend, or an admiring fan, Charlotte continued to inundate Fanny with flowers, although Fanny was rapidly becoming overhelmed by Charlotte's intensity. [...] Soon Charlotte's efforst seemed to irritate her more than offer relief. Perhaps Fanny was embarrased by Charlotte's effusiveness or by the plainly romantic quality of her attachment. Fanny had only one thing on her mind – retaining her children – and Charlotte's flowers and poetry were of no help or solace" (70-71).

Eventually, Fanny and Charlotte parted on bad terms after Fanny no longer appreciated Charlotte's help and affection: "Charlotte was deeply insulted. She had gladly. willingly, offered her assistance, and, now that she was deemed no longer of use, she was being dismissed. Charlotte would harbor ill feelings about Fanny Kemble for years" (Merrill 72).


Cushman's "emotional significance for American audiences depended on her recognition that she would have to go to England and achieve renown before the American public would have the right to assert that American talent could rival British which had for so long dominated the American stage. […] The model prominent in their imaginations must have been that of Fanny Kemble, the talented and beautiful British actress who had taken America by storm, accepted the hand of the eligible and aristocratic Philadelphia bachelor, Pierce Butler, and then offended him by refusing to adapt herself to American notions of propriety in marriage. Her notorious separation from her husband had occurred in 1844, and Charlotte Cushman, Fanny's friend and confidante in Philadelphia where the domestic drama had been played out, had been privvy [sic!] to the seamy details of Butler's infidelities and his cruelty in successfully gaining custody of Fanny's children." (Parrott 314–15)