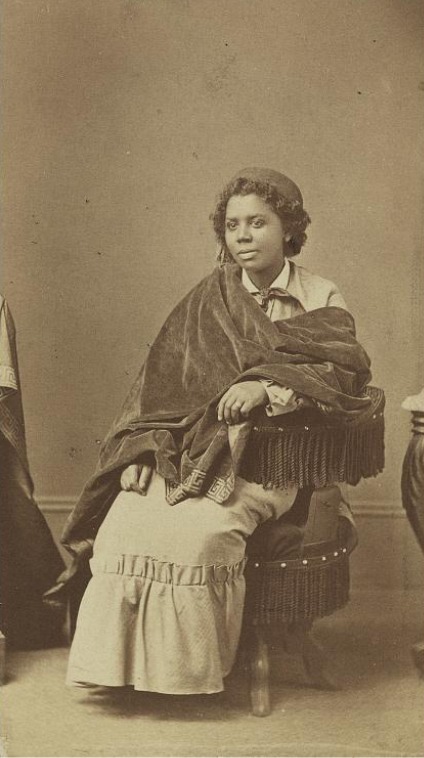 Edmonia Lewis is among the many prolific US American women sculptors who chose Italy as their home in the 1850s to 1870s. Yet unlike her contemporaries, Lewis is of Black and Native American (Chippewa) descent – a topic repeatedly addressed by contemporary newspaper articles.
Before emigrating to Italy, Lewis attended Oberlin College (1859-1863). Her education there came to an end, when news broke of "Mysterious Affair at Oberlin-Suspicion of Foul Play- Two Young Ladies Poisoned-The Suspected One Under Arrest" (Plain Dealer, Deb 11, 1862) with Lewis being "the suspected one." Lewis herself was attacked and severly beaten. Neither case was resolved at the time. Instead, Lewis was accused of theft one year later. Innocent, but marred by scandal, she never formally graduated from Oberlin College. She instead left for Boston, where she turned to sculpting and found the support of abolitionists such as William Lloyd Garrison and Lydia Maria Child.
In 1865, at only twenty years old, Lewis emigrates to Rome (the travel financed by successful sales of her bust of Colonel Robert Gould Shaw). On her reasons to stay abroad for the rest of her life, The New York Times reports in 1878:
"Miss Lewis makes not secret of the reason of her return to Rome, which she has adopted as her home. 'They treat me very kindly there,' she said, 'but it is with a kind of reservation. I like to see the opera, and I don't like to be pointed out as a negress.'"

While in Rome, Lewis joins the circle of expatriate female artists around Charlotte Cushman and Harriet Hosmer, growing especially close with fellow sculptor Anne Whitney. Lewis establishes her own studio, which remains a busy tourist attraction during the height of the popularity of neoclassicism, visited by prominent US Amerian visitors such as Frederick Douglass. Lewis' works include Old Arrow Maker, Forever Free, and Hagar. Many of her works have, unfortunately, not survived.


For more on Edmonia Lewis, her time in Rome, and one the most famous sculptures she produced overseas, The Death of Cleopetra, see by "The Object at Hand" published in Smithsonian Magazine (1996).

The most exhaustive and detailed discussion of Edmonia Lewis's life and work can be found in Kirsten Pai Buick's Child of Fire. Mary Edmonia Lewsi and the Problem of Art History's Black and Indian Subject (Duke UP, 2010). Lewis is also a central character in Melissa Dabakis' A Sisterhood of Sculptors. American Artists in Nineteenth-Century Rome (Pennsylvania State UP, 2014). Charmaine A. Nelson's The Color of Stone. Sculpting the Black Female Subject in Nineteenth-Century America (U of Minnesota P, 2007) discusses her sculptors together with those of Harriet Hosmer and Anne Whitney. A detailed account of the Oberlin case can be found in "John Mercer Langston and the Case of Edmonia Lewis: Oberlin, 1862" by Geoffrey Blodgett (1968).

In Henry James's William Wetmore and His Friends (1903), Lewis is not named but indirectly referred to and thereby marginalized.