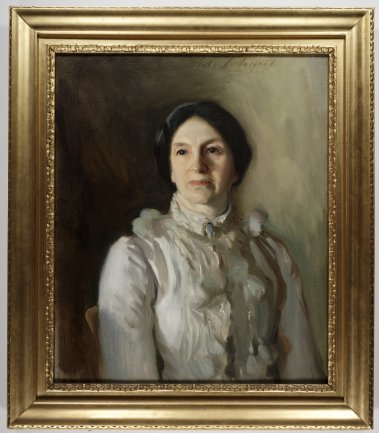 Annie Fields spends a considerable amount of time with Stebbins and Charlotte Cushman in Rome in 1860. Annie Fields and her husband are friends with Charlotte Cushman and prove to be of particular interest for the actress in terms of social capital and the editorial network they offer Charlotte. Recurrrently, Charlotte discusses her private life with both Fields and asks James Field, in particular, to promote her interests in his The Atlantic Monthly, which he owns and is the editor of.
Annie Fields is an upper-class woman married to James Fields, one of the owners of the publishing company Ticknor & Fields and editor of the Atlantic. Dickens, Hawthorne, Stowe, Longfellow, Emerson, Thoreaz, and the Brownings are among the frequent visitors to their house at 148 Charles Street, in Boston, and their home abroad.
After her husband's death, Annie is living in an intimate relationship with S. O. Jewett (cf. Wichelns chapter for reference). Jewett exchanges letters with Henry James and his sister, publishes in The Atlantic Monthly, and knows Lanier. Fields continues her role as hostess after James Fields' death.
Fields gives an account of Charlotte Cushman's debut in the Globe Theatre with a large audience and a circle of friends in 1871.

For primary sources on Annie Fields, the Fields Papers as well as Howe's Memories of a Hostess (1922) are of interest.

Bradford (1925) mentions Annie Fields as a favorable account of Charlotte Cushman's life and character that contrasts with Stillman's negative portrayal of the actress.

Helen Howe, daughter of Mark Antony De Wolfe Howe, wrote that in her parents' "circle of friends in Boston, several households consisting of two ladies, living sweetly and devotedly together. Such an alliance ... [she] was brought up to hear called a 'Boston marriage.' Such as 'marriage' existed between Mrs. Fields and Sarah Orne Jewett. [Her] [f]ather wrote of it as a 'union - there is no truer word for it.'" (Howe 83)

In her monograph Cultural Work of the Late Nineteenth-Century Hostess (2002), Harris characterizes Fields as a person "whom 'everybody’ knew but who was always projected in relation to other people rather than for herself, as a 'hostess,' a facilitator of other people's interactions, rather than as a principal actor on her social stage" (Harris 2).

Fields was the center of "important reading communities--that is, loose groups of acquaintances, usually living at some distance from each other, who tended to read the same books and ponder the same issues" (Harris 2). Additionally, "Annie Fields took the skills she learned while entertaining her husband's literary friends and acquaintances into her 'second career' in social welfare in lace nineteenth century Boston" (Harris 3). Harris clarifies what being a hostess meant: "In the days before instantaneous communication and rapid mobility, to 'entertain' others in one's home meant to provide a locus for interaction that one's guests well might not otherwise have" (Harris 4); "The intimacy of the Charles Street house enabled visitors feel that they were especially honored by Annie Fields's confidences." (Harris 13)

Fields also "circulated on the margins of more radical women's groups" (Harris 8) even though Harris does not view her as radically pushing women’s rights. In terms of Fields’ connection to Germany, Harris remarks that "[o]ne of her sisters, Sarah Holland Adams, passed much of her life in Germany, as a professional translator, especially for Hermann Grimm" (Harris 11).

Summarizing the scholarship on Jewett and Fields’ relationship, Harris reports that Lillian Faderman "suggest[s] that Fields and Jewett's relationship was lesbian. Among recent commentators, Rita Gollin remarks that their 'deeply affectionate association resists labeling,' and Paula Blanchard treats it as a mutually sustaining, sororal/maternal friendship between equals" (Harris 16). Referring to the term 'Boston Marriage,' she argues that "[i]n an era when the lone woman was suspect, regarded as emotionally unmoored and therefore dangerous, evidence of a stable same-sex relationship reassured rather than alarmed most of their contemporaries. The uneasiness Henry James expressed in The Bostonians about Boston marriages was exceptional; for most of hist contemporaries, they constituted an extremely practical solution not only to the problem of loneliness but also the problem of social activity for unmarried women" (Harris 16–17). However, "hundreds of condolence letters treating Fields as the grieving spouse testify to the fact that their relationship was universally perceived as a union" (Harris 17).
Harris emphasizes that the figure of the hostess "has control" over those particpating in her circle (Harris 64).
The following observation can also be transferred to the Cushman-Fields correspondence, which is accessible here: "During James T. Fields's tenure as editor of the Atlantic Monthly Fields was especially vulnerable to requests from writers that she relay messages to her busy husband. Rebecca Harding's letters are especially illustrative here; in part because she had greatly enjoyed an 1862 sojourn in the Fields's Charles Street house, and in part because she saw Annie Fields as equally powerful with her husband, she often addressed them as one person" (Harris 64). Gollin notes that "only few friends knew that she [Annie] was also his [James's] editorial assistant" (35). However, "[b]ecause Fields often enlisted his wife to correspond with Atlantic contributors, their friends in particular, many of them used Annie as a middleman to transmit or request information about their transcripts" (Gollin 36).


After a one year trip to Europe, the Fields came back to Charles Street in 1860. For their time in Rome, Gollin notes that "[a] typical day might include breakfast with the great actress Charlotte Cushman, and her sculptor-companion Emma Stebbins, dinner with Harriet Beecher Stowe, and an evening party attended by other denizens of Rome's expatriate community" (29).

In terms of Fields's relationship to Cushman, Gollin notes that the "The middle-aged actress Charlotte Cushman–a more complex and unconventional woman with a far more important career–would become a closer friend. The Fieldses had first encountered the 'clear-hearted, clear-headed woman' and her companion Emma Stebbins in Genoa, where they all sat down for 'a jubilant home-like talk'; and as Annie would recall over two decades later, 'Many of the pleasantest days in Rome that winter were passed under the roof and at her table. here was to be seen . . . everybody of interest either among the/
residents in Rome or the chance visitors to that city.' [source: Biographical Notes by AF] Related pleasures included visiting Stebbins's sculpture studio and taking excursions with the two women; and during the next decade, Annie relished each opportunity to watch Cushman perform and to entertain her at Charles Street" (29-30).

"But when Cushman returned from abroad in 1871, over a decade after Annie first met her, there were new grounds for admiration. 'A wonderful woman with a cancer at her breast, she is preparing again for a season on the stage,' Annie wrote in her journal that September. Then she continued even more melodramatically, 'Twice it has been destroyed but the myriad headed serpent seems to be gnawing at her heart--Such pathos as there is in it--such power and sweetness and courage! Poor soul! The valley looks very very dark to her but she struggles on and on, making the days sunshiny for others which are often frightfully dark to herself.' Because Emma Stebbins was then also unwell, Annie offered to care for her, a generous offer apparently refused. Sitting in the Globe Theatre on 13 November 1871, raptly watching Cushman's 'noble piece of acting' as Queen Katherine in Henry VIII, Annie felt she 'spoke to every woman's heart there; by this I felt the high art and the noble sympathetic nature far above art which was in the woman and which radiates from her.' Seated between her husband and Longfellow, Annie was sure that as a woman, her appreciation exceeded theirs. As Cushman portrayed her, the unjustly abased queen was an embodiment of womanly courage. Perhaps because Annie thought 'much of the play beside was poor,' she did not accompany Jamie backstage. Instead, she gave a dinner in Cushman's honor two weeks later, with Stebbins and Longfellow among the guests. 'We have Miss Cushman here and are enjoying her very much both as an actress and a woman,' Annie told Laura Johnson the following day, marvelling that the fifty-five-year-old woman still stood 'quite alone on the English stage,' managed to seem vigorous despite the pains of cancer, and 'likes those persons she can give to and do for- it is a vocation.' […] Annie counted many of the period's most celebrated actors as her friends, Edwin Booth, Charles Fechter, Helena Modjeska, and Ellen Terry among them. But she admired none of them more than Charlotte Cushman. A woman of impeccable probity whose first American ancestor had arrived on the Mayflower, Cushman at first mounted the stage to support her family, and soon attained international fame. It was simply irrelevant that she shared her life with another woman and often played men's roles." (Gollin 177)

"From the time she met Annie in Italy until her death sixteen years later Charlotte Cushman enlarged Annie Fields's ideas about what a virtuous woman could do and be. Although her reading of the Organ Ode in 1863 was only an incidental event in a long and distinguished career, it was crucial to Annie. When Charlotte Cushman died in February 1876, both of the Fieldses attended her funeral services at King's Chapel, joined the long cortege that proceeded to Mount Auburn Cemetery, and mourned her as a great artist who was also a magnificent woman." (Gollin 178)