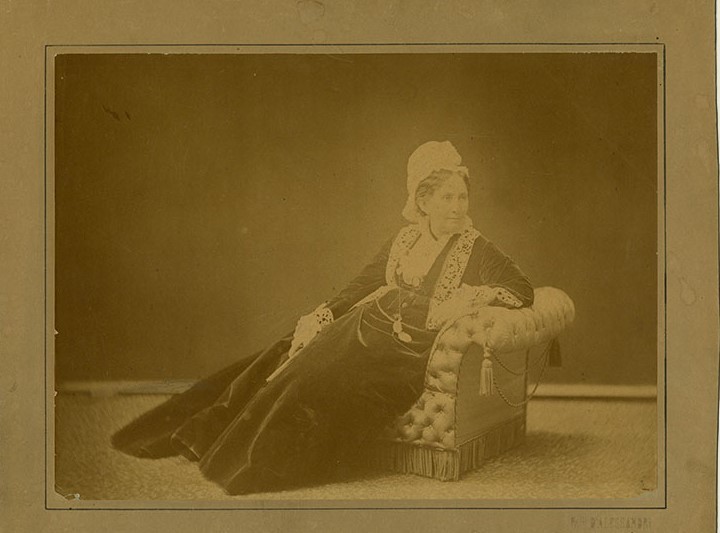 Anne Hampton Brewster is an American novelist, journalist and foreign correspondent. She is born to Maria Hampton and Francis Enoch Brewster. In the 1840s, Brewster and Charlotte Cushman meet in Philadelphia, where Cushman is manager of the Walnut Street Theatre. (Brewster's posthumous account of Cushman in Blackwood Magazine details their early time together.) Brewster's brother disapproves of their relationship, about which Brewster subsequently wonders in her diary "is such love wrong?"
Cushman later supports Brewster in her decision to move to Rome, even though their relationship is never as intimate as in the 1840s (cf. Brewster's article of 1878). In July 1869, Brewster notes in her diary (ABP 3 4, 112) that she has "received delightful letters from Europe latley, from Emma Stebbins, Charlotte Cushman at Rome [...] They all urge me to come abroad [...] She (C.C.) begs me to join her in England this October and journey to Rome with her. I wish I could but it is impossible However by another year I shall be ready [...]"
In a letter to Helen Hunt [Jackson], Cushman talks disparagingly about Brewster and her work as a writer, which suggest a rift not yet covered in secondary material on their relationship:
"I wish I could find in any newspaper as real honest letters, & written in as good English as these, but Miss Anne Brewster is the kind of food my country people like to eat, so in Gods name let them have it. Better people have, & can again starve, while Mrs. Brewster & such writers flourish like a [?] bay tree" (March 29, 1871)

The bulk of surviving letters from Anne Brewster are to her partner Mary Howell. Brewster's diary entry from June 1876 is one of the key sources for details about Cushman's break-up with Matilda Hays in 1857.

"Anne Brewster, who by 1876 had supplanted Cushman as the most influential salonnière in Rome, Brewster recorded her impressions in a diary entry"(Parrott 327)

The Roman Years of a South Carolina Artist: Caroline Carson's Letters Home mentions Brewster and a young (male) artist she supported at the age of 54 (the letters only begin in 1872, so not mention of Cushman and only one comment on Hosmer - guess she sucks at carnival)