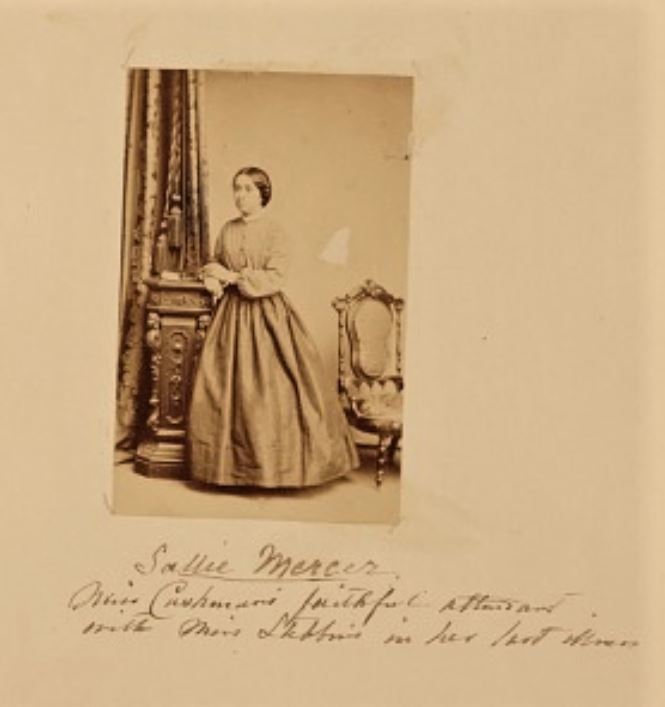 Sallie Mercer starts working as a maid for Charlotte Cushman at around age 14 in 1844. She is the only one to accompany Cushman on her first trip to England and will stay with her until her death. Over the course of these three decades Mercer takes on several roles in Cushman professional and private life, most importantly taking care of her theater costumes, arranging her travels, and managing her household in Rome. In Stebbins's memoir of Cushman, Mercer is described as follows:

It was about this time that Miss Cushman's well-known
maid, Sallie, became a part of her family, — I might well
say a part of herself, for she always called her "her right
hand." Any memorial would be incomplete which would
leave out the friend and companion of all her wanderings,
the sharer of her trials and her triumphs, the good, de
voted, faithful Sallie Mercer. (37)

In her will, Cushman bequeathes "to her faithful servant, Sallie Mercer, $500 yearly and the use of a house in Philadelphia free of rent." Cushman's partner Emma Stebbins continues to mention "my good Sallie" (letter to Anne Whitney, July 6, 1878) as her companion even after Cushman's death, which suggests that the two stayed not only in touch, but shared the home in Newport, to which both were given "use" in Cushman's will.

Letters addressing her touring in the South before the Civil War point to Cushman's reluctance to travel there for fear of safety of Mercer, who was African American. Other letters include greetings from Mercer to Cushman's correspondents which stresses Mercer's standing within this network of women (e. g. by Geraldine Jewsbury).
Our collection also includes one letter (by Matilda Hays) addressed directly to Sallie Mercer. Her own handwriting survices at the end of this letter from 1865.

While we do not know the exact date of her death, we can infer that she died in or shortly before 1894, since reference is made to her death in this letter.

"Sallie had long since become much more than a usual maid. Her strong opinions might surprise Charlotte at times, especially her frank distaste for the fawning attention that swirled around fame, but between them had grown a working relationship that far exceeded the ordinary ties between mistress and servant. Charlotte never discounted the solidarity that hard-headed Sallie lent to her life." (Leach 246)