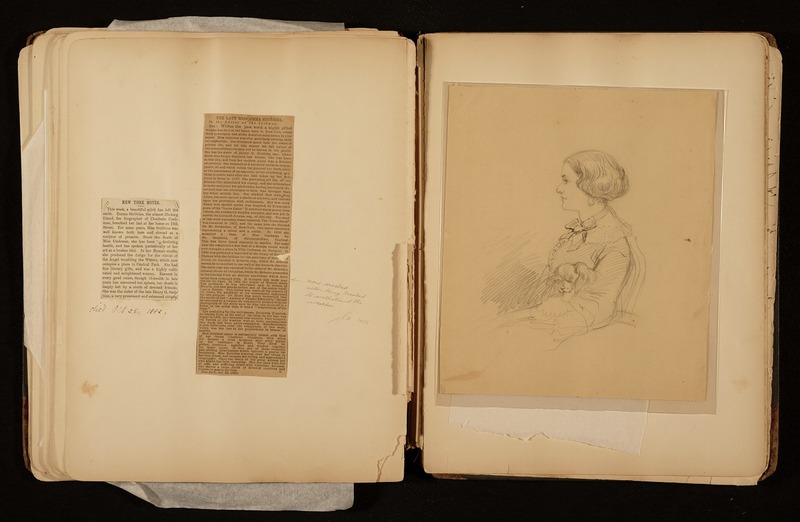 Obituaries taken from Emma Stebbins scrapbook: Scrapbook inluding photographs of Stebbins, her dogs, and her sculpture, a sketch of Stebbins with her dog, clippings, and biographical notes. Compiled by Mary Stebbins Garland, Emma Stebbin's sister.

The obituaries stress her genius as a sculptor and mention a close "intimacy" to her "friend" Charlotte Cushman.

NEW YORK NOTES
This week, a beautiful spirit has left the earth. Emma Stebbins, the almost life-long friend, the biographer of Charlotte Cushman, breathed her last at her home on 16th Street. For some years, Miss Stebbins was well known both here and abroad as a scupltor of promise. Since the death of Miss Cushman, she has been +++ declining health, and has spoken pathetically of her art as a broken idol. In her Roman studio, she produced the design for the statue of the Angel troubling the Waters, which now occupies a place in Central Park. She has fine literary gifts, and was a highly cultivated and elightened wman. Earnest in every good cause, though ill-health in late years has narrowed her sphere, her death is deeply felt by a circle of devoted friends. She was the sister od the late Henry G. Stebbins, a very prominent and esteemed citizen.
[added in ink: died Oct 25. 1882)

THE LATE MISS EMMA STEBBINS.
To the Editor of the Tribune.
SIR: Within the past week a highly gifted woman has died at her home here in New-York, whose work as a sculptor and artist deserves some notice in your paper. Miss Stebbins was of a peculiarly retiring, modest position. She withdrew much into the shade of private life, and for this reason the full extent of her accomplishments may not be known to the public. [...] In 1859 she modelled a bust of Miss Cushman for  Mr. Shepard, of Shepardstown, England. This was three times repeated in marble. [...]
The modelling for the well-known Bethesda Fountain in Central Park, at the foot of the steps by the lake was begun in 1861, and occupied four winters. Four allegorical figures of the seasons were to have accompanied this work, but were never completed. Miss Stebbins's health failed soon after the completion of this work, which was the last of her productions in bronze or marble.
Miss Stebbins' name is indissolubly linked with that of her friend Charlotte Cushman, with when [sic] she formed a close intimacy soon after taking up her residence in Rome. They lived together, travelled together and worked together for many years. It was one of those romantic and abiding attachments which indicate a genius for friendship. Miss Stebbins watched over her friend in her late illness, and became her loving and appreciative biographer. Since the death of the great actress her own health has been declining. Her last days were full of pain abd suffering borne with Christian heroism. She leaves a large circle of devoted relatives and friends to mourn her loss.
New-York, Oct 30, 1882